As Halloween approaches, I reflect on the beginnings of The Mind’s Eclipse and how a horror game became a sad story of a family wrestling with disease that still manages to strike the cords of a scary game.

Note: There will be spoilers.

“What if we made it sad?” Chris asked me in the winter of 2015. I had just told him my grand plans for The Mind’s Eclipse: this crazy inventor named Jonathan Campbell (don’t worry, we’ll change the name later, I promise) wakes up to find that he has created a new form of existence for humanity, one that has left its creator behind. 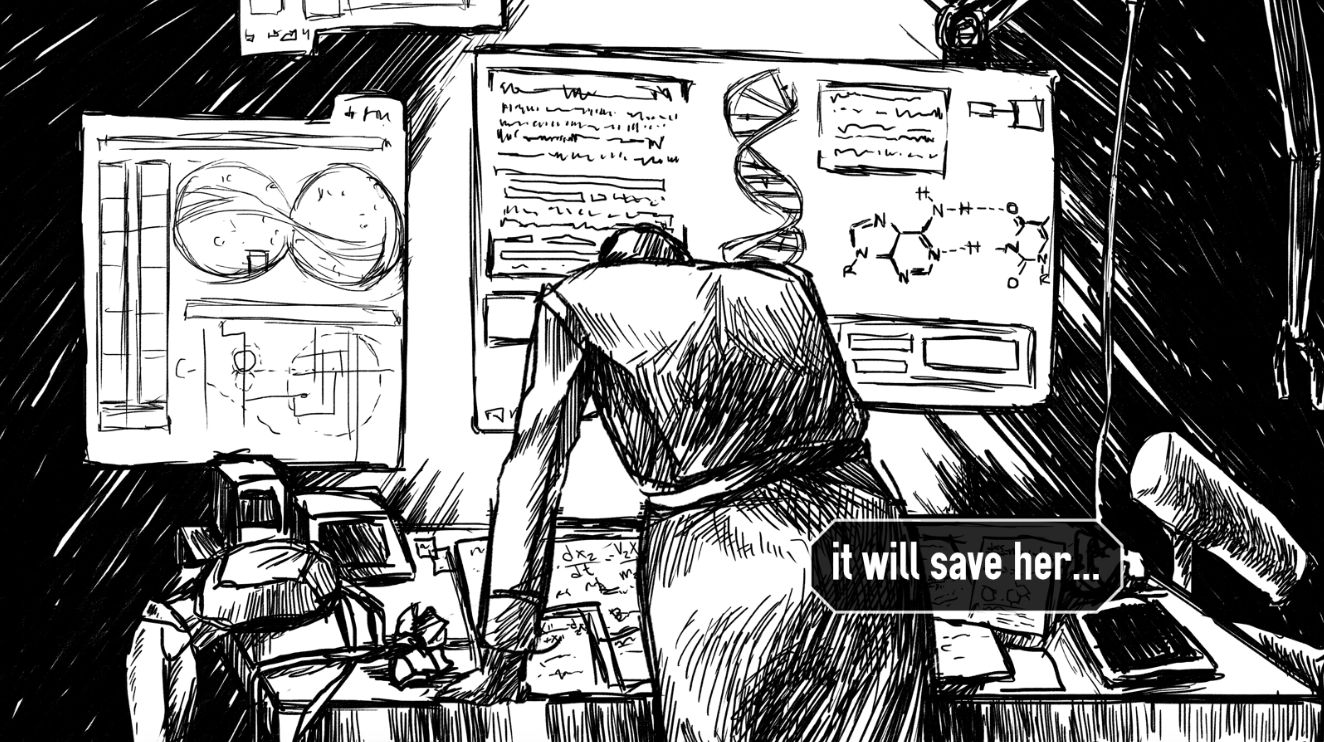 The Mind’s Eclipse was supposed to challenge the public’s perception of a visual novel: games that lean heavily on romance and character relationships to complement the main story.

I wanted this game to do a complete 180! There wouldn’t be any romance or dating in this visual novel. I wanted The Mind’s Eclipse to ask tough questions about human transcendence, and the horror that would come from gaining immortality.

I was even thinking about adding space-zombies (I cringe as I write this sentence) because I was heavily inspired by games such as Dead Space and the BioShock series. But I realized very quickly that zombies are boring, and that I simply could not write a horror game given my limited writing experience.

I asked two good friends of mine to join the project and add their own writing skills to the game.

“What if we make it more about Jonathan’s family? Does he have a wife? A child?” Chris asked, brainstorming what would be the first of three or four scripts for the game.

Chris, Langdon, and I soon discovered a new story. One that involves a main character that creates transcendence for a very specific purpose: to save his loved ones from disease. 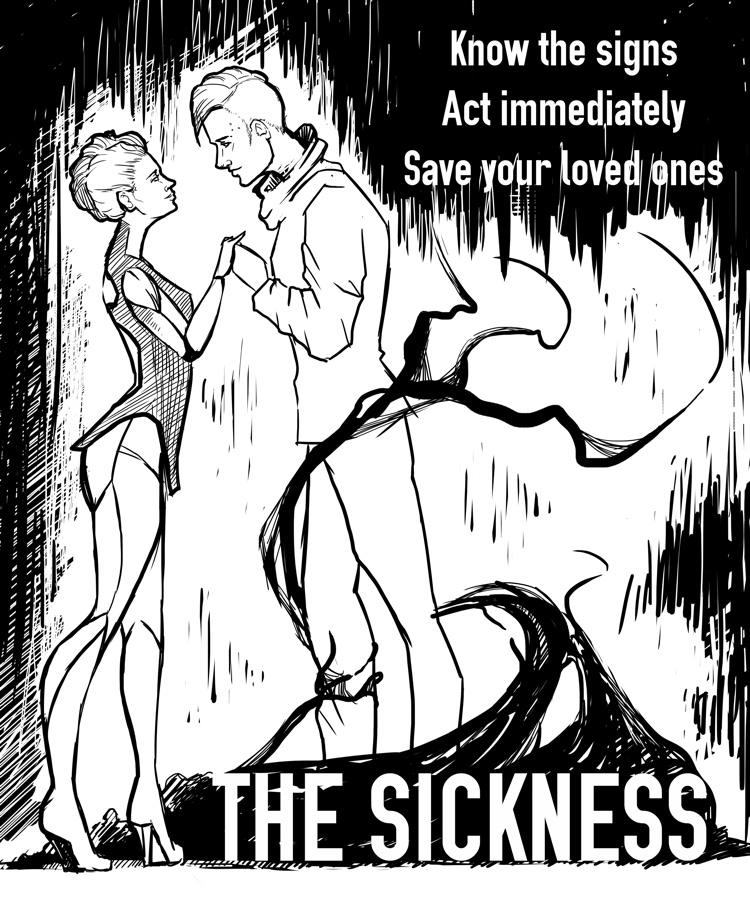 And the twist? The main character doesn’t remember any of it. He has to wander the halls and streets of this giant city and uncover the truth for himself.

The Remnants of a Horror Game

As Jonathan wanders the CORE, we see the remnants of the original horror game design. The main character never encounters a living person. Instead, all he discovers are the bodies of people who have died, mangled by some unknown disease or weapon. And then there’s COSy: 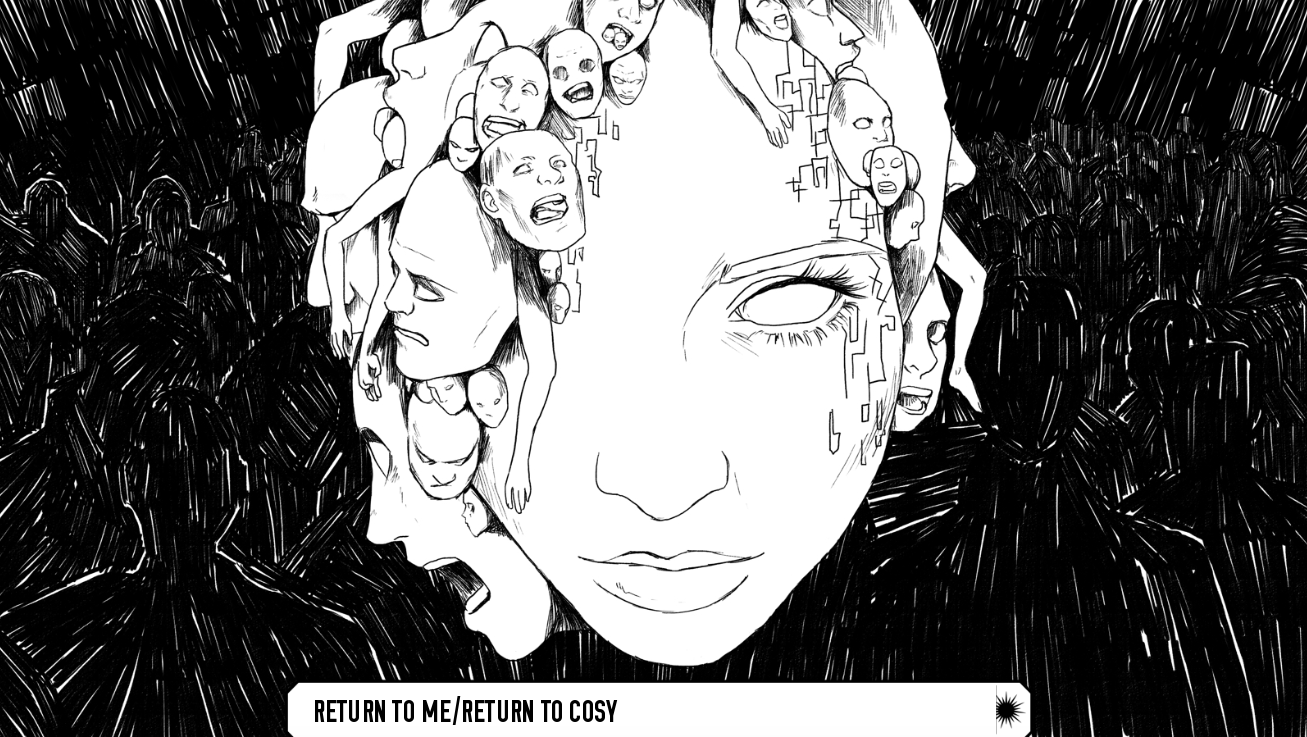 Jon’s perception of reality is assaulted by COSy, an entity that player’s usually suspect is some sort of rogue AI haunting the station. COSy’s design is horrific, with it’s multiple faces crying out in pain. For COSy’s soundtrack song, we even recorded almost all the members of the team wailing into a microphone which Ryan turned into a haunting musical piece. And the character even morphs into something more terrifying towards the end of the game: 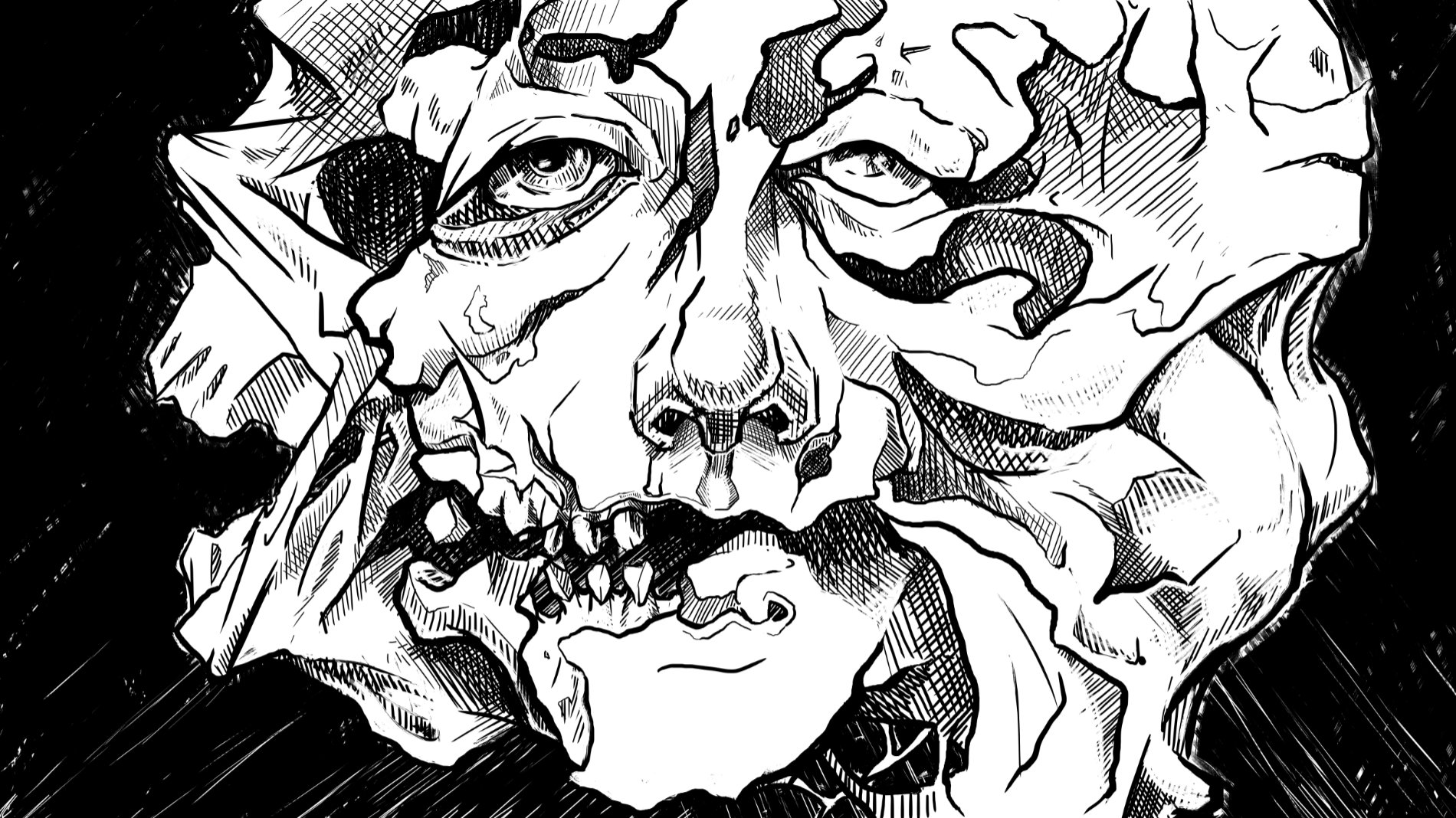 But I mentioned that this was to become a sad story. Jonathan eventually uncovers the truth behind the CORE and COSy: he has created an invention that would allow humans to escape disease and death. Named “The Eclipse”, this invention was fueled by the loss of his wife.

We learn very early in the game that Jonathan lost his wife decades ago to a terminal disease, and that the Eclipse is a more recent development.

And then there’s Jonathan’s daughter, Ellen.

Ellen did not approve of how Jonathan handled her mother’s last weeks dying in bed in the sterile hospital environment surrounded by uncaring machinery. This was contradictory to her original wishes: being at home with her husband and daughter like she had wanted, like she had been originally promised by Jonathan. A sad outcome to say the least.

As the player continues to unfold the story, we find more remnants of the horror design culminating in bizarre horrific landscapes that the player navigates to escape COSy: 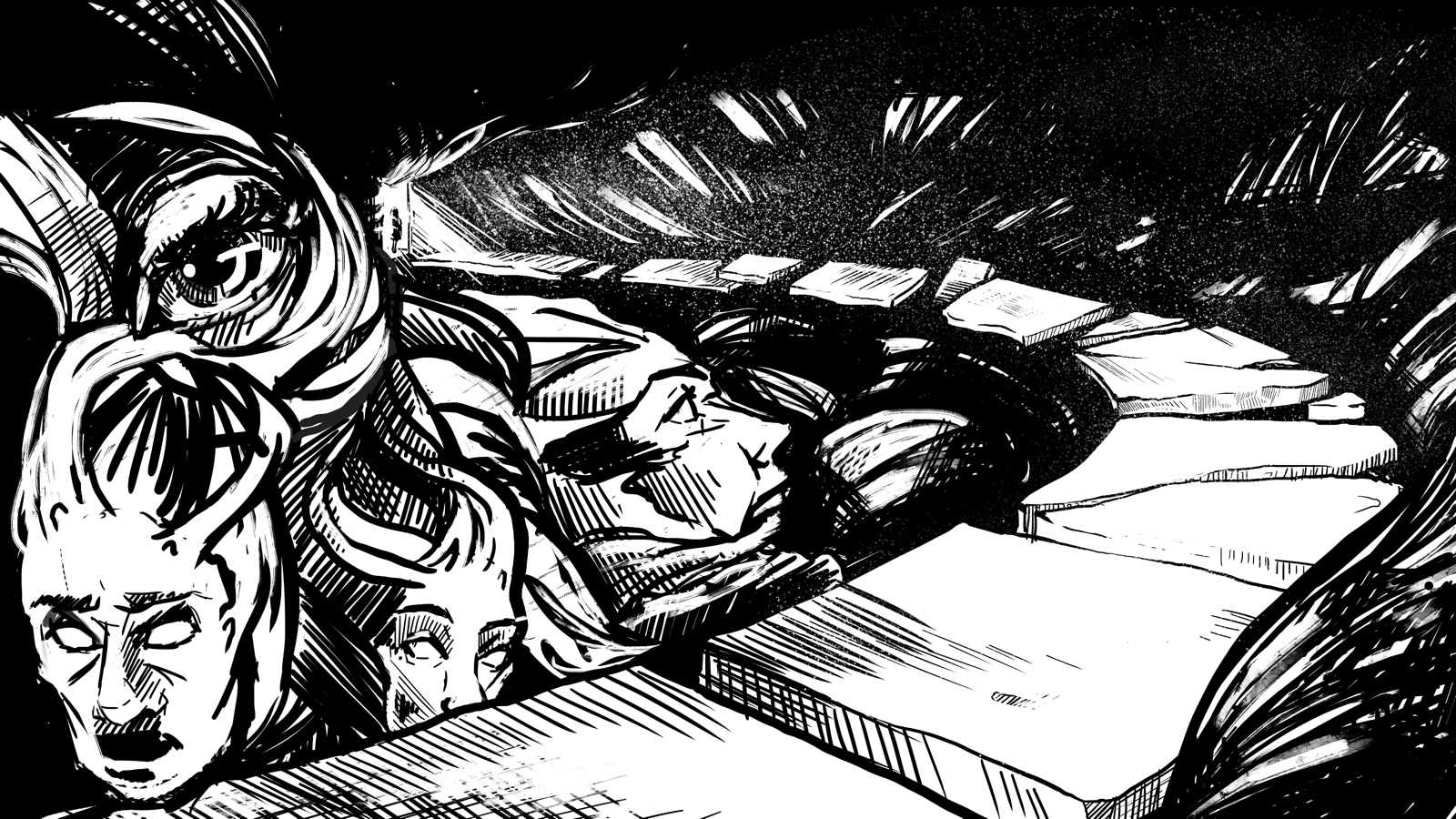 But this pales in comparison to the truth we learn regarding Jonathan and his relationship with his daughter.

Like her mother, Ellen suffers from the same terminal disease, a discovery that prods Jonathan to charge ahead with research on the Eclipse.

We quickly learn that ethical boundaries are crossed, both in the research required to make the Eclipse possible as well as it’s first true subject.

Based on her experience with her mother’s illness, Ellen swore off the promise of advanced technology to extend life. She, just like her mother, wanted to live life to her fullest, and when death came for her, she would embrace it with acceptance and grace.

But Jonathan couldn’t let go. Fueled by loss, grief, and, frankly arrogance, he tempted his daughter with the promise of immortality, and when disease took her to the point of no longer being able make decisions for herself, he used his power to sequester her and keep her from any other friends and loved ones that could protest her embracing untested technology.

As Halloween approaches this year, I think about the horror game that I had originally intended to develop and realized that this sad, emotional story surrounding Jonathan, his wife, and daughter turned out to be scarier than I had ever hoped for.

Sure, zombies and malicious artificial intelligences can be frightening, but these things don’t exist in our world.

Instead, the true horror lies in Jonathan’s choice to take freedom away from his loved ones and ignore their wishes.

Note: Written by Donald Campbell, who directed and programmed The Mind’s Eclipse. The game is currently 70% off to celebrate Halloween and “scary” games.

Get The Mind's Eclipse

Explore a fallen utopia. Find your loved ones. Beware COSy.